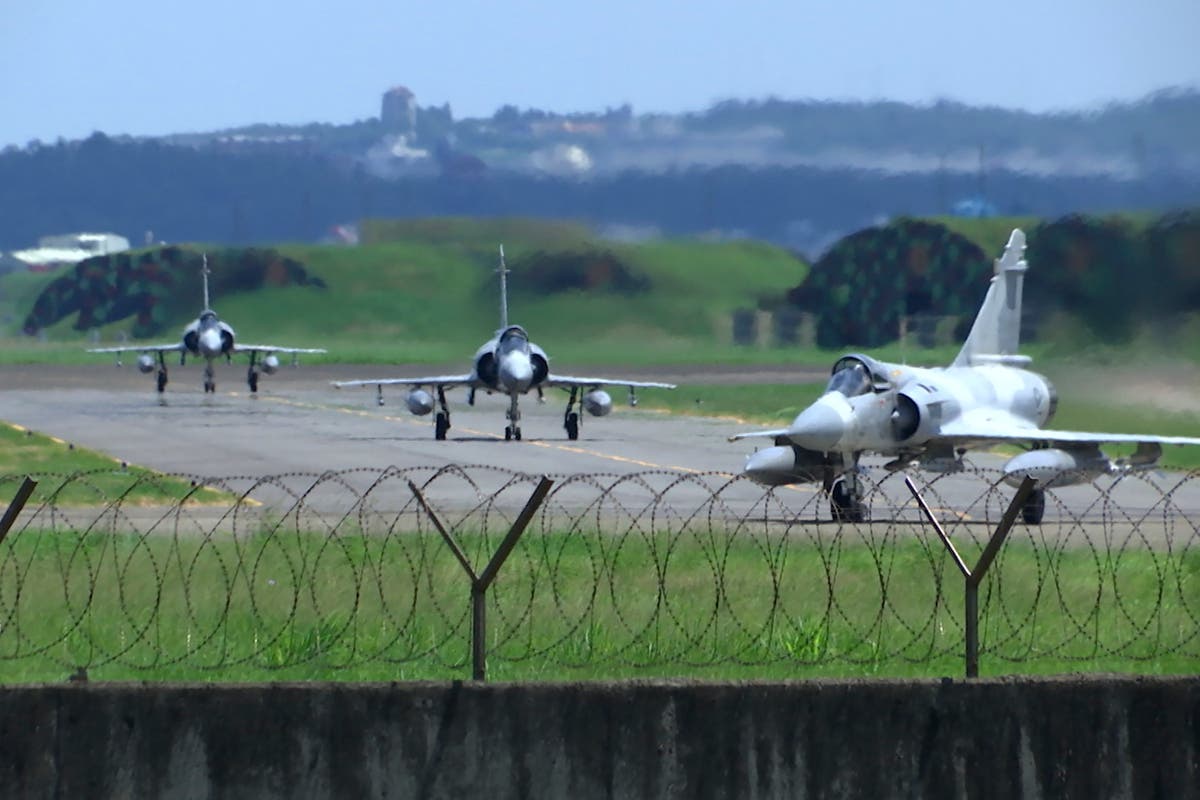 CONGRESS-BUDGET — Senate Democrats say they have reached an accord on their top-priority economic legislation, clearing a major hurdle to moving the measure through the chamber in coming days. Arizona Sen. Kyrsten Sinema, a centrist who was seen as the pivotal vote, says she is ready to “move forward” on the bill. By Alan Fram. SENT: 990 words, photos.

ECONOMY-JOBS REPORT — The American job market has defied raging inflation, rising interest rates, growing recession fears. Month after month, U.S. employers just kept adding hundreds of thousands of workers. But now economists worry that signs of weakness are starting to turn up in hiring, threatening one of the United States’ last remaining redoubts of economic strength. Job openings are down, and the number of Americans signing up for unemployment benefits is up. Forecasters, on average, expect the economy to have picked up another 250,000 jobs last month,. That would be a solid number in normal times but a big deceleration for 2022: Employers have been hiring an average 457,000 workers a month so far this year. By Paul Wiseman. SENT: 1,000 words, photos.

RUSSIA-UKRAINE-WAR — Three more ships with grain have departed Ukrainian ports and are headed to Turkey for inspection, Turkey’s defense ministry says. The three ships are loaded with a total of 58,000 tons of corn. SENT: 200 words, photos.

THE AP INTERVIEW-SAMANTHA POWER — For Samantha Power, the top official in charge of U.S. aid, explaining the role Russia’s war on Ukraine is playing in a worsening global food crisis is part of the job — as is directing billions of dollars in U.S. humanitarian support. Power, the administrator of the U.S. Agency for International Development, tells the AP, “We’re not going to allow more lies to be perpetuated.” By Ellen Knickmeyer. SENT: 990 words, photos, video.

RUSSIA-UKRAINE-WAR-PROTEST — Relatives of prisoners of war captured by the Russians following the fall of Mariupol gathered in central Kyiv Thursday demanding information about their husbands, fathers and sons following a strike on a prison housing POWs in a separatist region of eastern Ukraine last week that reportedly killed and wounded dozens. SENT: 980 words, photos.

LAS-VEGAS-HOTEL-SHOOTING — Police said they were investigating a fatal shooting Thursday in a hotel room at the Mirage hotel on the Las Vegas Strip. Las Vegas police said on Twitter that one person was dead. SENT: 50 words.

GASOLINE-ASSAULT-HATE-CRIME — Police in suburban Denver say they’re looking for a man who doused two customers with gasoline at a fueling station after confronting them because they were speaking Spanish and “don’t belong here,” according to a department statement. SENT: 230 words.

ELECTION 2022-ARIZONA-GOVERNOR — Kari Lake, a former news anchor who walked away from her journalism career and was embraced by Donald Trump and his supporters, has won the Republican primary for Arizona governor. By Jonathan J. Cooper. SENT: 820 words, photos.

ELECTION 2024-DEMOCRATIC PRIMARY — Democrats may be moving toward shaking up their presidential nominating process starting in 2024. They’re poised to boot Iowa from the lead-off spot as part of a broader effort to allow earlier primaries in less overwhelmingly white states that better reflect the party’s diverse electorate. By Will Weissert and Thomas Beaumont. SENT: 1,330 words, photos.

ELECTION 2022-WISCONSIN-GOVERNOR — Republican hopes to reclaim a crucial governor’s seat in Wisconsin this year appeared to rest on Rebecca Kleefisch, who spent eight years as former Gov. Scott Walker’s heir apparent. Then a wealthy construction company owner jumped in, dumped $12 million of his own money into the race and won Donald Trump’s backing. By Scott Bauer. SENT: 1,060 words, photos.

CONGRESS-IRS — One of Washington’s favorite punching bags, the Internal Revenue Service, may finally get the resources it’s been asking Congress for if Democrats get their economic package focused on energy and health care over the finish line. By Kevin Freking. SENT: 850 words, photo.

INSULIN PRICES-EXPLAINER — Reining in the soaring prices of insulin has thus far been elusive in Congress, although Democrats say they’ll try again as part of their economic package that focuses on health and climate. Why is insulin so expensive? By Amanda Seitz. SENT: 720 words, photo.

ELECTION 2022-WYOMING-DICK CHENEY — Former Vice President Dick Cheney excoriates Donald Trump in a new campaign video for his daughter Rep. Liz Cheney, calling him a “coward” and saying there has never been anyone who is a “greater threat to our republic” than the former president. SENT: 530 words, photo.

WESTERN WILDFIRES — A small town in Washington state was evacuated due to a fast-moving fire that burned a half-dozen homes, as crews in California made progress against the state’s deadliest and largest wildfire of the year. SENT: 790 words, photos, video.

HAWAII-CONTAMINATED-WATER — The Honolulu Board of Water Supply says it has detected a small amount of a chemical naturally occurring in coal, crude oil and gasoline in a monitoring well near a Navy fuel storage facility that spilled jet fuel last year. SENT: 460 words, photo.

IRAQ-CLERIC’S-SUPPORTERS — Khalil Ibrahim’s four sons are among thousands of followers of an influential Shiite cleric staging a sit-in outside Iraq’s parliament after storming the building last week in a stunning move that threw the country into a new era of political instability. SENT: 990 words, photos.

ISRAEL-PALESTINIANS-BANKSY — A long-lost painting by the British graffiti artist Banksy has resurfaced in a swank art gallery in downtown Tel Aviv, an hour’s drive and a world away from the concrete wall in the occupied West Bank where it was initially sprayed. By Ilan Ben Zion and Isaac Scharf. SENT: 980 words, photos

THAILAND-PUB-FIRE — At least 13 people were killed and dozens injured when a fire broke at a crowded music pub in eastern Thailand, police and rescue workers say. SENT: 460 words, photos.

VIRUS-OUTBREAK-GERMNAY — Germany’s health minister, an epidemiologist by training who has led the country’s fight against COVID-19 since December, has tested positive for the coronavirus. SENT 200 words.

SPACEX-SOUTH KOREA-MOON — South Korea joined the stampede to the moon with the launch of a lunar orbiter that will scout out future landing spots. The satellite launched by SpaceX is taking a long, roundabout path to conserve fuel and will arrive in December. SENT: 430 words, photos.

TWITTER-MUSK LAWSUIT —Twitter denied in a court filing that it had deprived its would-be acquirer, billionaire and Tesla CEO Elon Musk, of necessary information or misrepresented details about its business. Musk originally made those charges to justify his attempt to back out of a $44 billion deal to buy the social platform, which he later claimed was infested with much larger numbers of “spam bots” and fake accounts than Twitter had disclosed. SENT: 430 words, photos.

INDIA-ECONOMY — India’s central bank on Wednesday raised its key interest rate by 50 basis points to 5.4% in its third such hike since May as it focuses on containing inflation. SENT: 460 words, photo.

FILM-EASTER-SUNDAY — Touted as the first big U.S. studio movie with an all Filipino cast, “Easter Sunday” is another expression of comedian Jo Koy’s love for his heritage. The film’s arrival is another indicator of the growing influence of Filipino Americans in mainstream culture. SENT: 980 words, photos.

RUSSIA-GRINER — A judge in Russia convicted and sentenced WNBA star Brittney Griner to nine years in prison for drug possession and smuggling. Griner’s time in custody since her February arrest will count toward the sentence. Griner apologized to her family and teams during closing arguments in her drug possession trial. SENT: 1,200 words, photos. With: BKL—Brittney Griner-Timeline; BKL—Mercury-Sun-Griner (sent).

FBN–WATSON-LEGAL CASES — A lawyer representing two dozen women who have accused Deshaun Watson of sexual assault or harassment says NFL Commissioner Roger Goodell has a chance to “do the right thing” now that the league has appealed a six-game suspension for the quarterback. By Kristie Rieken. SENT: 660 words, photos. With FBN-Watson-Appeal (sent).

BKW—EQUAL PAY-COLLEGE REFEREES — The NCAA earned praise last year when it agreed to pay referees at its men’s and women’s basketball tournaments equally. The gesture only cost about $100,000, a tiny fraction of the roughly $900 million networks pay annually to broadcast March Madness. Now, as the NCAA examines various disparities across men’s and women’s sports, pressure is rising to also pay referees equally during the regular season. By Basketball Writer Doug Feinberg. UPCOMING: 1,130 words, photos by 4 a.m.

Is the EU’s Ukraine strategy working?