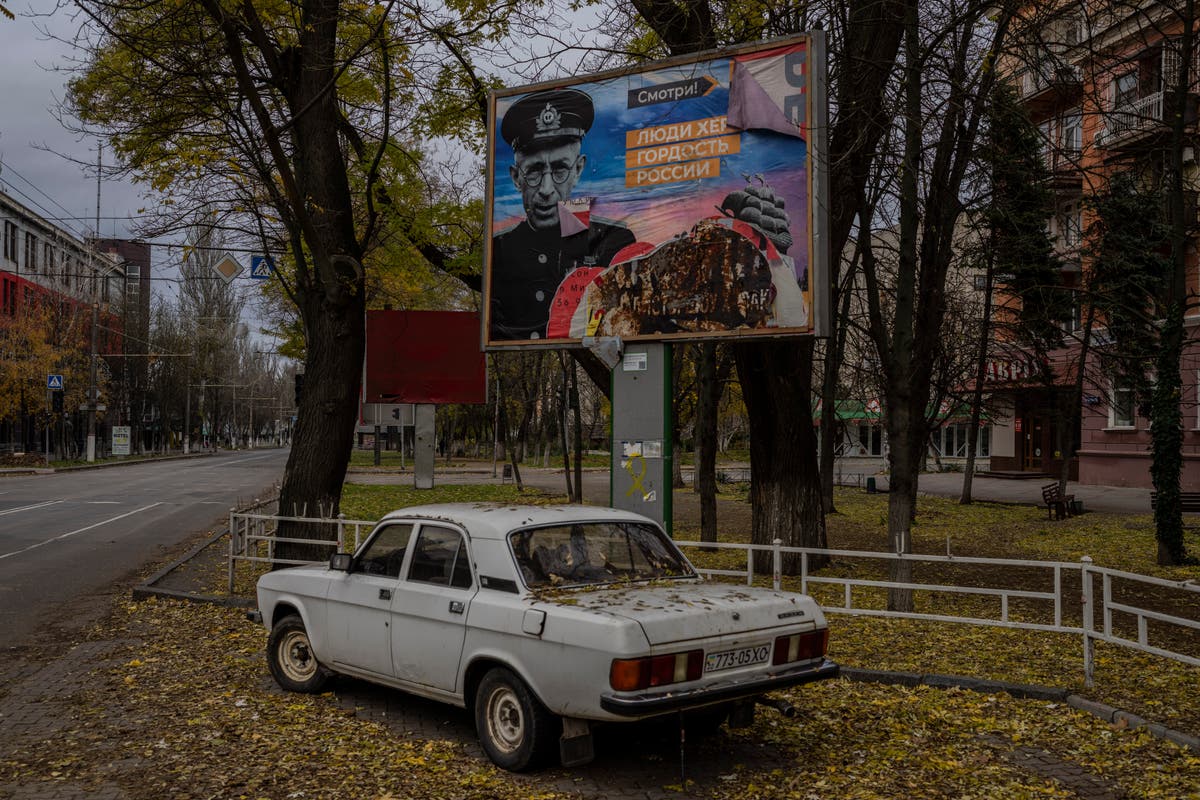 SUPREME COURT-GAY RIGHTS — The Supreme Court is hearing a case next week involving a Christian graphic artist who objects to designing wedding websites for same-sex couples. Liberal groups say ruling for the designer will expose not only same-sex couples but also Black people, immigrants and others to discrimination. Conservative groups argue that ruling against her will force artists to do work that is against their faith. By Jessica Gresko. SENT: 920 words, photo.

RUSSIA-UKRAINE-WAR-COST-OF-DEFENSE-EXPLAINER — Even as Ukraine celebrates recent battlefield victories, its government faces a looming challenge on the financial front: how to pay the enormous cost of the war effort without triggering out-of-control price spikes for ordinary people or piling up debt that could hamper postwar reconstruction. By David McHugh. SENT: 1,250 words, photos.

SHANGHAI-PROTESTS — What started as an unplanned vigil last weekend in Shanghai by fewer than a dozen people grew hours later into a rowdy crowd of hundreds. The protesters expressed anger over China’s harsh COVID-19 policies that they believed played a role in a deadly fire on Nov. 24 in a city in the far west. Then, a woman defiantly shouted for Chinese leader Xi Jinping to resign, emboldening others. Before dawn, police moved in to break up the gathering. The Nov. 26 protest in Shanghai wasn’t the first or the largest. But it was notable for the bold calls for the leadership change — the most open defiance of the ruling Communist Party in decades. By Dake Kang and Huizhong Wu. SENT: 1,570 words, photos. This is the Sunday Spotlight.

COLORADO-SPRINGS-SHOOTING-EXPLAINER — More than a year before police say Anderson Lee Aldrich killed five people and wounded 17 others at a gay night club in Colorado Springs, Aldrich was arrested on allegations of making a bomb threat that led to the evacuation of about 10 homes. But the case was later sealed and what happened with the charges is unclear. There are no public indications that the cases resulted in a criminal conviction. Officials refuse to speak about what happened, citing a 2019 sealing law, which was passed to help prevent people from having their lives ruined if cases are dismissed and never prosecuted. SENT: 1,100 words, photos.

HOUSTON-SHOOTING-MIGOS — A 33-year-old man was arrested on a murder charge in the shooting of rapper Takeoff, who police said was an “innocent bystander” when he was struck by gunfire outside a Houston bowling alley. SENT: 550 words, photos.

TEXAS-SCHOOL-SHOOTING-SURVIVOR-LAWSUIT — Victims of the Uvalde school shooting that left 21 people dead have filed a lawsuit against local and state police, the city and other school and law enforcement officials seeking $27 billion due to delays in confronting the attacker, court documents show. SENT: 430 words.

KANSAS CITY BOY’S-DEATH PLEA — A man has pleaded guilty in the killing of a 4-year-old Kansas City boy whose death led to a federal operation meant to reduce violent crime in 2020. Ryson Ellis, 24, of Kansas City, was sentenced to 22 years in prison after pleading guilty to second-degree murder, unlawful use of a weapon and armed criminal action. SENT: 230 words, photo.

AUSTIN-POLICE-PORCH-SHOOTING — The family of an Austin, Texas, man is seeking answers after he was fatally shot by police last month on his front porch following a late-night emergency call by a neighbor. Video and audio released Thursday show Austin police officers arrived Nov. 15, yelled “drop your gun,” then fired at Rajan Moonesinghe, who was holding an AR-15-style weapon.

NEW-YORK-WRONGFUL-IMPRISONMENT-LAWSUIT — A man who was freed in 2015 after spending a quarter-century in prison for an infamous tourist killing will receive nearly $18 million in legal settlements from the city and state of New York, his attorneys confirmed. SENT: 400 words, photos.

WCUP-NETHERLANDS-US — The United States plays the Netherlands in the World Cup’s round of 16, with the winner facing Argentina or Australia in a quarterfinal. By Ronald Blum: UPCOMING: 700 words, photos Game starts at 10 a.m. EST.

WCUP-CAMEROON’S-VICTORY — Cameroon coach Rigobert Song came full circle on a memorable and bittersweet night for African soccer. Jerome Ngom Mbekeli, the only member of Cameroon’s team who plays for a Cameroonian club, made an inspiring run and cross to set up Vincent Aboubakar’s header and stoppage-time winner in a 1-0 victory to make the Indomitable Lions the first African nation to beat Brazil at a World Cup. SENT: 480 words, photos.

WCUP-SERBIA-SWITZERLAND — Xherdan Shaqiri took off as soon as the ball hit the back of the net. It was no surprise where he was headed after scoring the first goal in Switzerland’s 3-2 win over Serbia on Friday, a result that put his team into the round of 16 at the World Cup for the third tournament in a row. SENT: 710 words, photos.

RUSSIA-UKRAINE-WAR — Russia said that Western demands for it to pull out from Ukraine as part of any future talks to end the war effectively rule out any such negotiations. Russian strikes continued and a Ukrainian official set his country’s battle losses at up to 13,000 troops. SENT: 720 words, photos.

RUSSIA-UKRAINE-WAR-NEW REALITY-PHOTO-GALLERY — When Ukraine wrested back Kherson from Russian occupiers nearly a month ago, it was a moment of glory and pride, hailed as the beginning of the end of the war. But hardship for the city’s residents was far from over. SENT: 410 words, photos.

HAWAII-VOLCANO-CRUCIAL-HIGHWAY — Many people on the Big Island of Hawaii are bracing for major upheaval if lava from Mauna Loa volcano slides across a key highway and blocks the quickest route connecting two sides of the island. SENT: 880 words, photos.

ABORTION-INDIANA — Indiana’s Republican attorney general can keep investigating an Indianapolis doctor who spoke publicly about providing an abortion to a 10-year-old rape victim from neighboring Ohio, a judge has ruled. SENT: 750 words, photos.

CHILDREN’S-HOSPITAL-INVESTIGATION — A former medical director of a Virginia hospital that serves vulnerable children has been charged with four felony sex crimes in connection with abuse that authorities say happened at the facility years ago. SENT: 670 words, photos.

CZECH-BEETHOVEN’S-SCORE — A musical manuscript handwritten by Ludwig van Beethoven is getting returned to the heirs of the richest family in pre-World War II Czechoslovakia, whose members had to flee the country to escape the Holocaust. SENT: 570 words, photos.

PAKISTAN-AFGHANISTAN — The United States has condemned the attack on the Pakistani embassy in Afghanistan’s capital in which a senior Pakistani diplomat escaped unhurt but one of his Pakistani guards was wounded. SENT: 490 words.

SOUTH-KOREA-TRUCKER’S-STRIKE — Thousands of demonstrators representing organized labor have marched in South Korea’s capital denouncing government attempts to force thousands of striking truckers back to work after they walked out in a dispute over the price of freight. SENT: 480 words, photos.

MEXICO-MIGRANTS-SLAIN — Two migrants were found shot to death in a car in southern Mexico, authorities say. Officials believe the intended victim was the migrant smuggler who was also riding in the car but escaped. SENT: 190 words.

ENDANGERED-TOAD-GEOTHERMAL-PLANT — A tiny Nevada toad at the center of a legal battle over a geothermal power project has officially been declared an endangered species, after U.S. wildlife officials temporarily listed it on a rarely used emergency basis last spring. SENT: 760 words, photos.

MPOX — The federal government plans to end in January the public health emergency it declared earlier this year after an outbreak of mpox left more than 29,000 people across the U.S. infected. SENT: 400 words, photo.

RAILROAD-CONTRACT -TALKS – Most railroad workers weren’t surprised that Congress intervened this week to block a railroad strike, but they were disappointed because they say the deals lawmakers imposed didn’t do enough to address their quality of life concerns about demanding schedules and the lack of paid sick time. Railroad workers face difficult tradeoffs that sometimes force them to skip doctor’s appointments or miss family events. The railroads acknowledge that more needs to be done to address workers’ “work-life balance concerns,” but managers believe these new contracts should help create more predictable schedules. And the five-year deals include 24% raises and $5,000 in bonuses. SENT: 810 words, photos.

FBN–NFL-WATSON’S RETURN — The NFL wanted to suspend Watson for at least one season over sexual misconduct allegations but settled for 11 games after an independent arbiter initially gave him a six-game ban. Watson, who has been accused by more than two dozen women of sexual harassment and assault during massage therapy sessions, will make his debut for the Cleveland Browns on Sunday against his former team in Houston. By Pro Football Writer Rob Maaddi. SENT: 855 words, photos.

Sunak sharpens knives of his detractors with handling of Williamson scandal

Jude Bellingham is a “unique” talent with a “special” ability to reach the very top. That is the verdict from