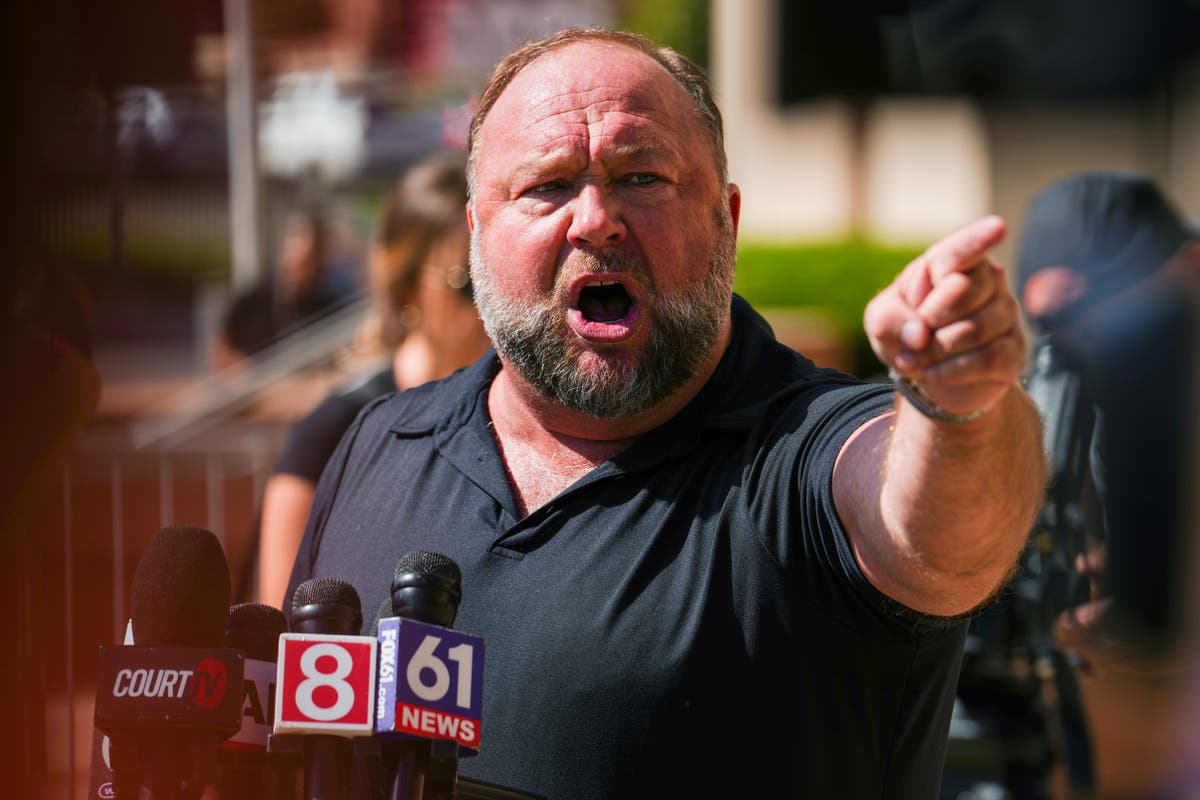 Loved ones of the Sandy Hook victims took the stand on the sixth day of the second defamation trial against conspiracy theorist Alex Jones.

Testifying before a Waterbury, Connecticut court on Wednesday, David Wheeler recounted how internet sleuths led by Jones’ lies and claims that the Sandy Hook Elementary School shooting was a hoax had showed up on his door demanding to see his six-year-old son, who was among 20 children and six educators killed in the attack.

Jones’s claims that the massacre was a government-orchestrated scheme were broadcast to his millions of viewers. Mr Wheeler said he found out about Jones’s bogus theories through a family friend, according to Insider.

“Someone came to the house and knocked on the door. The person demanded to see Ben, saying ‘I know he’s here, I know he’s alive,’” Mr Wheeler said. “I felt like I was underwater. I didn’t know which way was up. To have someone publicly telling the world that it didn’t happen, that you’re a fraud and a phoney is incredibly disorienting.”

Erica Lafferty, the daughter of Sandy Hook principal Dawn Hochsprung, who was also killed, gave a testimony eerily reminiscent of Mr Wheeler’s. Ms Lafferty described how she dealt with threats of violence and rape and people telling her that she “should die and be buried next to my fake dead mother” — all while coping with her grief.

“For 27 years of my life, that woman was my best friend,” Ms Lafferty, who has had to move five times since the conspiracy theories began, said. “For people to tell me she didn’t exist, how do you just let that happen?”

Mr Wheeler testified how his days were consumed by relentless messages online accusing him of lying, saying that Ben never existed and that he was going to burn in hell for taking part in the “hoax.”

Eventually, his and his wife’s names and pictures were posted on fake Twitter accounts. He was again called a liar, a crisis actor.

On two occasions, strangers arrived at his home demanding to see the son he had recently buried and was actively grieving.

The situation became so dire that Mr Wheeler had to sit down with his surviving son, Nate, and have a conversation with him about the reach of the conspiracy theories — his son didn’t understand how the suffering that was so raw and undeniable for them could be doubted by strangers.

“It was demeaning. It felt like being delegitimized in a way. It makes you feel like you don’t matter, like what you went through doesn’t matter,” Mr Wheeler said.

Although Jones never mentioned him by name, Mr Wheeler said his audience knew who he was referring to when the far-right Inforwar founder referenced “crisis actor.”

“Every time he uttered the words crisis actor, I know he was talking about me, and us,” Mr Wheeler said.

Despite Mr Wheeler’s initial reluctance to bolster his security, he eventually processed the scope of the situation and a Connecticut state trooper was assigned to drive the family.

Ms Lafferty told the court that she became aware of Jones’ conspiracy theories about Sandy Hook early on.

“Things would be mailed to my house. There were threats of rape,” she said, adding that she had unsuccessfully tried to report the threats but was told by police nothing could be done about it. “I was told it wasn’t specific enough or they couldn’t track it.”

She began engaging with the internet sleuths who had cast doubt on the massacre and sent mages of her mother in a desperate attempt to prove that the 47-year-old devoted principal had been real, that she had been violently killed. Ms Lafferty, too, was called a “crisis actress.”

As the grieving families grappled with the aftermath of the tragedy and were forced to relieve their trauma by conspiracy theorists, Jones’s audience grew exponentially and company revenues increased dramatically, the defence has argued.

Jones has already been found liable for the claims he made in the aftermath of the 2012 massacre. Jurors will now decide how much he should pay relatives of eight victims and an FBI agent who responded to the scene.

He is expected to testify on Thursday.

Prince Harry thanks ‘Granny’ for ‘sound advice’ and ‘infectious smile’