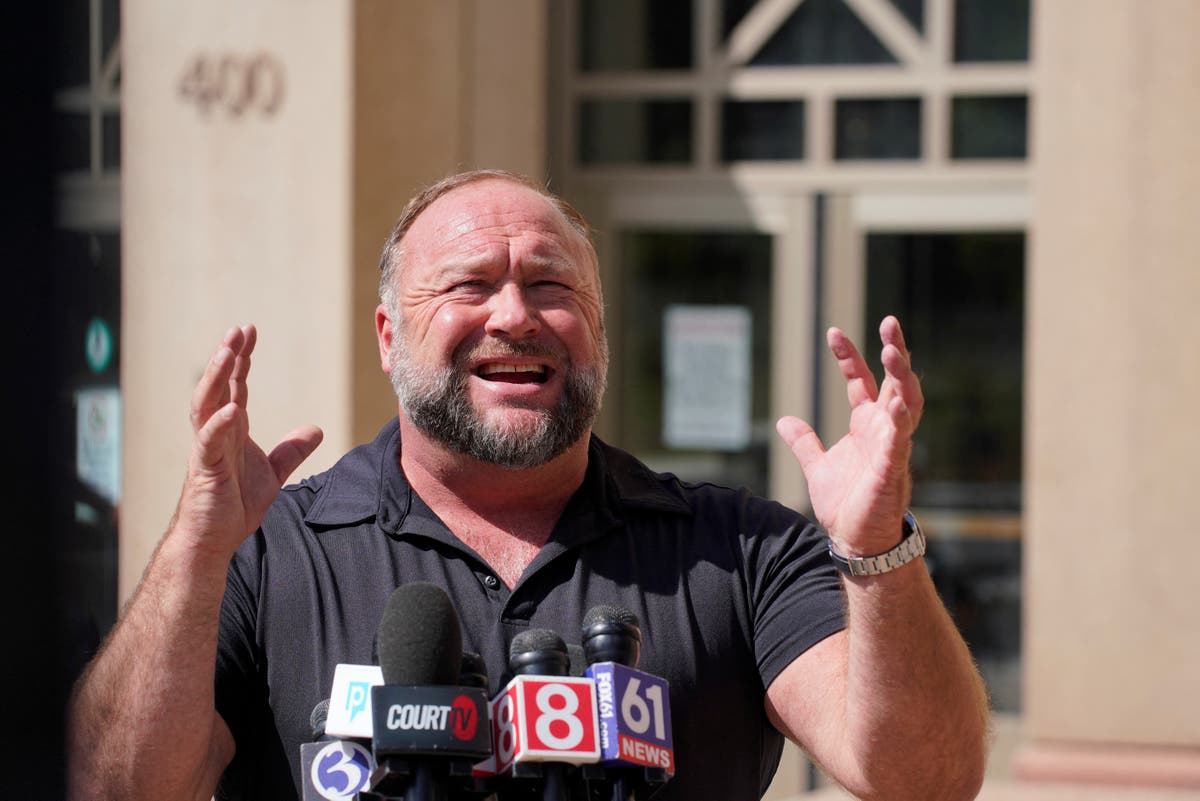 Alex Jones kicked off his combative testimony in his defamation case over his lies about the Sandy Hook massacre by pushing another wild conspiracy – this time about the so-called “deep state”.

The far-right conspiracy theorist took the stand on Thursday in his second defamation trial, where jurors will decide how much he must pay in damages to victims’ families over the lies he spread that the 2012 mass shooting was a “hoax” and the 26 victims murdered were “actors”.

His appearance on the stand instantly got off to a combative start as he said he didn’t think the case – to provide closure to families who have been terrorised and harassed for years because of his lies about their dead loved ones – was “important” but was part of a deep state conspiracy.

“I think it is a deep state situation,” he said.

The “deep state” is a discredited conspiracy theory pushed by Donald Trump and right-wing extremists and claiming that there is a clamdestine network of liberal elites controlling the US government.

Mr Jones often pushes the conspiracy theory – without evidence – on his show Infowars. The right-wing show is the same platform used by Mr Jones to push his lies about the Sandy Hook massacre.

Mr Mattei questioned the extremist about whether he believes the trial is “important”.

“This is an important case isn’t it?” asked Mr Mattei.

“I don’t think it is a case,” Mr Jones retorted.

The judge told the right-wing conspiracy theorist to answer only yes, no or I don’t know.

Before jurors entered the courtroom, Judge Barbara Bellis warned Mr Jones about topics that he could not speak about in his testimony, so as to avoid “any unpleasantness” in front of the jury.

Mr Jones told the judge he understood the rules.

He appeared under subpoena on the request of the legal team for the victims’ families.

This came after the right-wing conspiracy theorist has repeatedly disrespected Judge Bellis both on his Infowars show and during irate rants outside the courthouse.

On Tuesday, he launched into a furious rant outside the court where he branded Judge Bellis a “tyrant” and insisted he didn’t broadcast lies about the mass shooting “on purpose”.

In a follow-up rant on Wednesday, he took aim at the media over its reporting on the developments in his company’s bankruptcy case.

This came after the court was shown evidence last week that Mr Jones had been mocking Judge Bellis and calling the trial a “kangaroo court” on the very same platform that he used to push lies about the 26 victims of the Sandy Hook massacre.

In court on Friday, Christopher Mattei, a lawyer for the victims’ families, showed the court a screengrab which was taken from the Infowars website that week.

The picture showed Judge Bellis with red lasers for eyes, with the word “CONTEMPT!” plastered across it.

Mr Jones was successfully sued by the families of victims of the 2012 Sandy Hook Elementary School mass shooting in multiple lawsuits.

Mr Jones had began spouting false claims almost immediately after the 2012 massacre in Newtown, Connecticut, claiming on his conspiracy site that the mass shooting was “a giant hoax” and that the victims were “actors”.

He continued to push the lies to his followers for years claiming it was a “false flag” operation.

While Mr Jones profited financially from spreading his lies, the victims’ families were subjected to years of in-person and online harassment and threats from his followers.

In court on Wednesday, the parents of some of the young children murdered in the 2012 attack gave heartbreaking testimony about the toll Mr Jones’s actions had taken on them.

David Wheeler broke down in tears as he told how the conspiracy theorist’s lies had spurred strangers to show up at his door demanding to see his murdered six-year-old son Ben.

“Someone came to the house and knocked on the door. The person demanded to see Ben, saying ‘I know he’s here, I know he’s alive,’” Mr Wheeler said.

“I felt like I was underwater. I didn’t know which way was up. To have someone publicly telling the world that it didn’t happen, that you’re a fraud and a phoney is incredibly disorienting.”

Erica Lafferty, the daughter of Sandy Hook principal Dawn Hochsprung who was also killed in the massacre, testified that she had been forced to move five times to try to get away from the threats and harassment.

“For 27 years of my life, that woman was my best friend,” Ms Lafferty said of her mother.

“For people to tell me she didn’t exist, how do you just let that happen?”

The Texas suit was the first to go to trial last month.

In that trial, Mr Jones admitted that he knew the 2012 massacre was real – and not a “hoax” as he had previously claimed it was.

In that case, he was ordered to pay $4.11m in compensatory damages and $45.2m in punitive damages to Neil Heslin and Scarlett Lewis, the parents of six-year-old victim Jesse Lewis.

Now, jurors in Connecticut will decide how much Mr Jones must pay those families in damages.

Opinion: Putin has just laid a land mine under his regime

Snickerdoodle Oreos are about to be your new holiday favorite