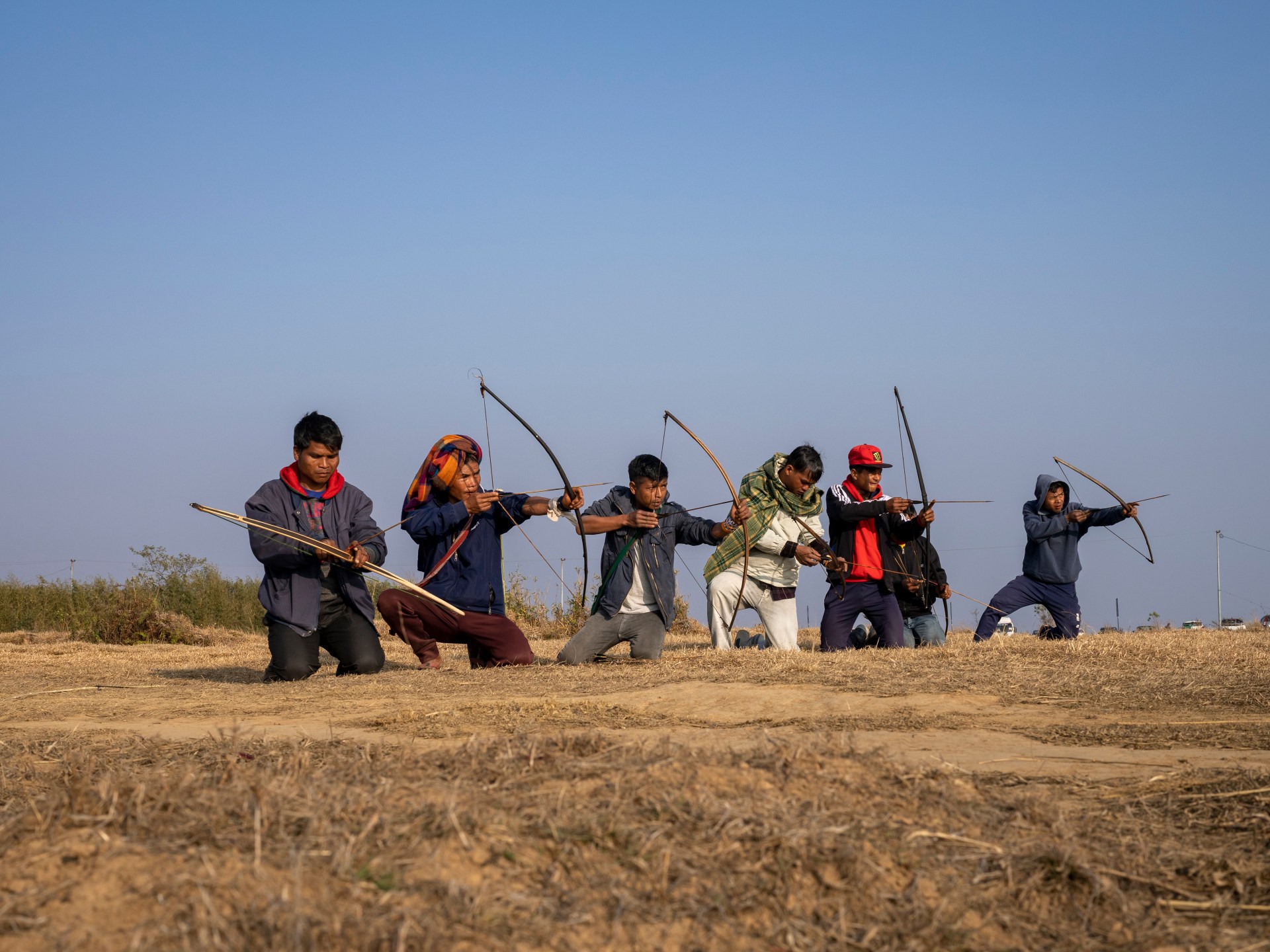 Thirty archers armed with bamboo bows and arrows sit on a platform awaiting instruction. Then they take aim at a straw cylinder 18 metres (60 feet) away. They each have 34 arrows to shoot in four minutes.

They release one arrow after another, their movements languid and practised. The next round of the competition soon follows, when the archers must shoot 24 arrows in three minutes.

The ancient skill of archery thrives in Shillong, the capital of the northeastern Indian state of Meghalaya. Every day, behind a row of liquor shops and next to a motor garage, this event is held except on Sundays and state holidays.

Archery is part of the traditional rites of Indigenous people in Meghalaya with folk tales of its origins told for generations. The rules of the event are set by the Khasi Hills Archery Sports Institute.

Khasis, along with the Jaintias and the Garos, are the Indigenous people of the state.

Matias Jyrwa, 58, used to watch the event with his father at the same venue since he was 11 years old. He is a proficient archer and has taught his sons to keep the tradition going.

“Not many young ones are interested, especially from the city. But in villages, it is still popular and that’s where most archers come from,” said Jyrwa, who is also the general secretary of the archery institute.

In villages across the state, a more traditional form of archery is practised. The archers have to hit a much smaller target mounted on a stick and a form of poetry called “phawar” – four lines composed on the spot – is used to rattle opponents.

But it is the curious marriage of this traditional event with the business of betting, called “teer”, that helps keep the tradition alive.

Dozens of small kiosks, often put together with recycled iron sheets and wood, dot the capital city known for its swanky cafes, football and a popular live music scene.

At these kiosks, one can bet small amounts of money by predicting the last two digits of the archery results and get the money multiplied several times if the guesses turn out to be correct. Since the money bet is small, the lure of a reward is strong and the counters see good traffic throughout the day.

The last two digits of the results are displayed immediately after the event ends and bettors and kiosk managers watch the event live on YouTube.

The local Khasi name for the betting is “tim”, derived from the English word team. When the British occupied India and had a strong presence in Shillong, the betting was done on polo teams, but locals have since adapted the idea to bet on archery results.

According to local legend, the most successful bettors are guided by their dreams when choosing the right, or lucky, numbers to bet on. But some have adopted more modern means to help a better decide on a number.

Bantei, a young man at one of the kiosks, offers an app on his smartphone for customers to use to help find their lucky numbers and place bets.

Did Beijing deliver a snub to Myanmar’s military regime?